In the grand finals of LG Ultragear TEC Valorant Challenger Series 2 we saw Velocity Gaming setting up a rematch with Global Esports, after a win over Noble Esports in the Lower-Bracket Finals. The final was a cracker of a series, which we saw going the distance. In the end, Velocity Gaming beat Global Esports  in the best of five series with a 3-2 scoreline

The match up definitely had each and every viewer on the edge of their chairs. The series went the distance in terms of maps, all 5 maps were played. The series saw the first map going to Global Esports before Velocity Gaming took the lead by winning the next two maps.

Talking about Bind, Global Esports began on the defensive side. While the map is dubbed to be a defensive sided map, Velocity Gaming opened things up with a win on the pistol round and the following anti-eco round. The first buy round went towards Global Esport as HellRanger’s  3k while playing Brimstone pulled things in their favour. The next two rounds were pulled back by Velocity Gaming before the half ended with 7 rounds in their favour. With the side swap, Global Esports took over the proceedings. They pulled out three rounds with the side swap. The game continued going back and forth before Global Esports ended the game with a 13-10 scoreline. Skillz’s performance was unmatched in the series as he dropped 28 kills, with 15 deaths and an ACS of 350.

Talking about Split, VLT began their half on defense. The map saw Velocity Gaming coming out in total dominance and was totally prepared to shut down Global Esports. They ended the half with 9 rounds in their kitty, looking to close out things early. Now on defense, Velocity Gaming showed no signs of slowing down and won the first two rounds; the pistol and the following anti-eco rounds. This lead coming out from Velocity Gaming lit a fire under Global Esports. Global managed to secure a few rounds for themselves, showing hopes of a comeback before Velocity Gaming decided to shut things down with a 13-7 scoreline. Rite2ace led the charge for his team, securing the match MVP position, with 20 kills and 12 deaths.

Haven, the third map of the series saw Velocity taking the lead of things again. The defending champions won the first 5 rounds in a row before Global could put an end to their winning streak. Global Esports was only able to salvage three rounds on defense, putting Velocity as the clear favorites to win the third map in the series as well. The half ended with a 9-3 scoreline. The second half didn’t last for long as well before Velocity Gaming denied Global of a comeback and bagged the second map with a 13-7 scoreline. Once again, rite2ace crowned himself as the MVP with a stellar performance of 18 kills for 12 deaths.

This took us to the fourth map of the series, Ascent. On Ascent, technical difficulties played the role of the devil. Ascent saw Hellranger and co. definitely feeling a lot more comfortable with their playstyle. Despite dropping the pistol round and the following anti-eco, Global Esports restricted Velocity Gaming to a mere 5 rounds on the map. Velocity Gaming was unable to hold their ground and conceded multiple rounds while defending and shortly lost the map with a 13-5 scoreline. 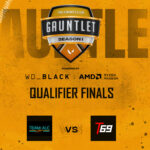