Team Moon put up a valiant fight against the heavily favoured Force One Esports, pushing them to the third map, as the latter secured a 2-1 series win (13-7 Bind, 6-13 Haven, 13-2 Ascent) to move to the TEC Gauntlet Main Event.

Force One Esports went for a double-initiator lineup, with Shivam ‘sh1vy’ Ajmani on the Breach and Rishi ‘Rvk’ Vijayakumar on the Sova. On the defence, Force One showed aggression towards B long, which pushed Team Moon towards the A site. After a long kerfuffle at A, it was Team Moon who emerged victorious, thanks to a triple-kill from Hassan ‘Asitte’ Aseel. It was Flex who showed next for Team Moon, with successive triple-kills from the young gun handing his side an early 3-0 lead. Team Moon could have secured a 4-0 lead, if not for sh1vy’s quad-kill clutch at A. Another quad-kill, this time from Rvk in the following round and Force One had taken decisive steps towards leveling up the scoreline. It wasn’t long before Force One saw another one of their players show up individually, with Divyansh ‘Scargod’ Jain’s quad-kill pushing his team to lead 6-4 on the Defence on Bind, with the first-half ending on 8-4 in favour of Force One. Team Moon though, hit back immediately, winning the second pistol as well, shutting down Force One’s attempt to take control of the A site with unnerving ease. Force One quickly restored their lead though, as the scoreline read 10-6. On the 17th Round, some crafty post-plant movement and positioning from Force One players prevented Flex from having any shot at converting a 1v3 clutch scenario, pushing Team Moon further away. It was Flex who shined through once again, with Team Moon responding with a round of their own to push the scoreline to 12-7. However, some crafty fakes on Round 20 ensured a 2v1 postplant situation for Force One, which Scargod converted to hand his team the first map 13-7.

Haven saw both teams go for rather conventional agent picks, with the only difference between the two teams being in terms of the controller they chose to run. Having started out on the Attacking side, Team Moon chose to go aggressive towards A on the first round of the map and survived a scare from Rvk to win the pistol round once again. Despite Force One getting the better of Team Moon on retakes, the latter continued to be their explosive selves on Attack and it paid off on certain rounds, with both the teams going into the second half level-pegging. The second-half witnessed one-way action, with Force One finding it tough to get going as Team Moon seemed to outwork their opponents during site holds and retakes. Trailing 6-12, Force One went for a wacky B rush with two of their players flanking fast from A. However, Team Moon read the situation perfectly and had two bystanders towards the A link to shut down the flank while their teammates took care of the B site to win Haven 13-6 and push the series towards the deciding map on Ascent.

Coming into Ascent on the back of being shut down completely on Attack, Force One knew they had to up the ante. Rvk rescued a B take with triple-kill clutch to land Force One their first pistol round of the entire series. Force One seemed to have taken a leaf out of Team Moon’s book from Haven and started adding explosiveness and bursting onto sites, which worked to their advantage massively on Ascent. Despite Team Moon being responsive to the quick executes, Force One cruised to a 6-2 lead. Another triple from Rvk in the following round and Force One seemed to be driving home the momentum gained from the early executes. The first-half ended with another triple from Rvk as Force One racked up a healthy 10-2 lead. Team Moon decided to hit the B site and as it turned out, the veracity of Force One’s players was just too much to handle for the Attackers, with a brilliant recon from sh1vy revealing all five players and Rvk teaming up with sh1vy to shut down Team Moon towards the B backsite. At 12-2, Force One had 10 map and series points but needed just 1 to secure the series, as sh1vy converted a 1v2 clutch retake at A to seal Ascent 13-2.

With Ascent in the bag, Force One Esports qualify for the TEC Gauntlet Main Event on the back of a monstrous performance from Rvk, especially on the deciding map of the series. Everyone chimed in perfectly for Force One Esports while commiserations were in store for Team Moon’s Duelist duo of Flex and Asitte. 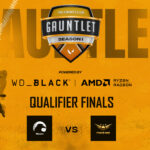